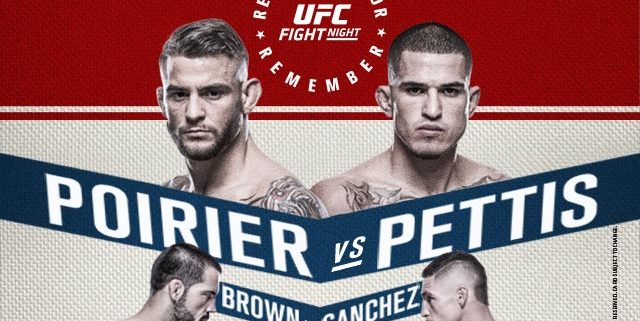 UFC® touches down in Norfolk, Va. for the first time, Saturday, Nov. 11, headlined by two of the lightweight division’s most fearless and entertaining athletes. No. 8 Dustin Poirier squares off in the main event against former champion No. 13 Anthony Pettis with both fighters hoping a win will land them in title contention.

Poirier (21-5, 1 NC, fighting out of Coconut Creek, Fla.) looks for his sixth win in his eighth bout since moving up to the highly competitive lightweight division. Poirier has 16 finishes in 21 career victories and has faced a who’s who of MMA fighters including Conor McGregor, Eddie Alvarez and Max Holloway. Pettis (20-6; fighting out of Milwaukee, Wisc.) will push Poirier’s skills to the limit with his savvy striking techniques. Pettis, who has also recorded 10 wins by knockout and six by submission, hopes to earn his third victory in his last four fights.

Another don’t blink matchup features popular veterans Matt Brown (22-16, fighting out of Denver, Colo.) and Diego Sanchez (29-10, fighting out of Albuquerque, N.M.) in a welterweight bout that is sure to please the crowd. The intense Brown has registered 13 career knockouts, seven submissions and has earned five post-fight performance bonuses. Sanchez is also an aggressive fighter who makes his return to the 170-pound division for the first time since a February 2012 matchup with Jake Ellenberger.